Following are the companies and organisations that serve as sponsors and brand partners to the Indian Super League (ISL), the topflight of professional men’s football in India (jointly with the I-League), for the 2021-22 season and enjoy a strong branding presence across its physical and digital assets. 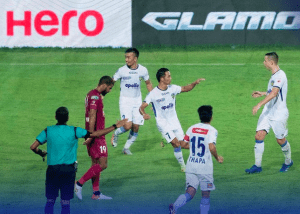 The New Delhi-headquartered Indian two-wheeler vehicles manufacturer has been the Title Sponsor of the ISL since its inaugural season in 2014. Most recently, the company renewed its deal with the ISL in January 2020 in a three-year agreement reportedly worth ₹160 crore.

The Gurugram-headquartered Indian tyre manufacturer serves as an Official Partner to the ISL since December 2017, with the deal having kicked off amidst the then-ongoing 2017-18 season of the league.

Apart from branding rights, the deal also entails matchday activations throughout a season. 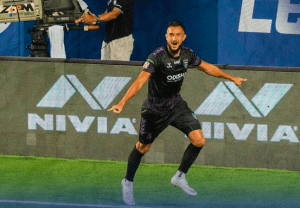 The Jalandhar-headquartered sports equipment manufacturer was announced as the official ball partner of the ISL in August 2018 on a three-year deal. The deal sees Nivia supply footballs to every club in the league for both matchdays and training sessions.

The Mumbai-headquartered Indian fantasy sports platform serves as the Official Fantasy Football Partner to the ISL. The deal sees Dream11 hold rights to officially host a fantasy football competition on behalf of the league. It also holds the licence to feature the official branding of the league and its clubs.

The English football topflight signed a “Mutual Cooperation Agreement” agreement with the ISL in June 2014, making the former a Strategic Partner for the latter. This partnership was last renewed in February 2020.

[…] Indian Super League club Odisha FC have announced a new partnership with Chesterfield-based IT company, Addooco IT. An industry leader in Managed IT, cloud and communications solutions, Addooco IT joins the club as a part of their Community and Kit partnership program. […]

[…] Although their form on the pitch has been less than satisfactory — with only two playoff appearances in seven seasons — the Highlanders will be looking to change that as they head into the 2021-22 ISL season. […]

[…] and the I-League, Singh was roped in by Odisha FC in the team’s inaugural season in the ISL in […]

[…] The royal club of the ISL and nicknamed the Nizams, Hyderabad FC are one of the latest clubs to have joined the Indian Super League. […]

[…] of the most flamboyant sides in the Indian Super League, FC Goa are one of the favourites to dominate the competition given the importance the sport holds […]

[…] second club in the Indian Super League from the City of Joy, East Bengal have been one of the heavyweights of Indian football right since […]