Following are the companies and organisations that serve as sponsors and brand partners to Indian Super League club Kerala Blasters FC (KBFC) and enjoy a strong branding presence across their physical and digital assets. 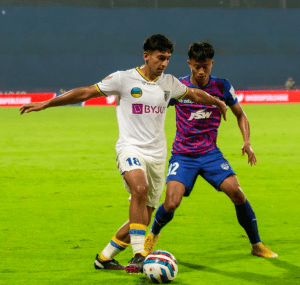 The Bangalore-based Indian EdTech platform has been the Principal Sponsor and the main front-of-matchday-shirt sponsor of the club since the 2020-21 season. The two parties last renewed their partnership in September 2021.

The Bangalore-headquartered Indian digital payments and financial services company was announced as the Official Payments Partner of the club in September 2021 to cover the 2021-22 season. As part of the deal, PhonePe also serves as the main back-of-matchday-shirt sponsor to the team for their ISL matches.

The Noida-based sports stock exchange and fantasy gaming platform was announced as the Main Sponsor of the club in November 2021. The deal sees EXHCHANGE22’s logo feature on the front of the team’s matchday and training shirts (opposite to the club’s crest).

Shiba Inu-inspired cryptocurrency Floki Inu was announced as the Official Cryptocurrency Partner of the club in November 2021.

Advertising itself as “the people’s cryptocurrency”, Floki aims to help communities across the world and has the vision of building a school in every continent—eventually building one in every underdeveloped nation—to which end it has also partnered with Pencils of Promise, which is a non-profit organisation that aims to provide educational opportunities in the developing and under-developed nations.

As part of the branding rights, the Floki logo features on the right sleeve of Kerala Blasters’ matchday shirt. The partnership also entails collaboration over fan-engagement initiatives.

Kerala Blasters signed a multi-year deal with cryptocurrency-based fan engagement platform Socios.com, which is powered by Gzira, Malta-based blockchain fintech provider Chiliz, in November 2021 to launch their own Fan Token.

As the Official Fan Token Partner of the club, Socios.com helps Kerala Blasters offer their fans a chance to obtain Fan Tokens that allow them to participate in several club-oriented activities. These Fan Tokens are limited in number and can be bought, sold or won in an augmented reality in-game (‘Token Hunt’).

With these Fan Tokens, fans can vote and directly contribute to some of the decision-making at the club, while also being able to avail unique VIP experience opportunities. 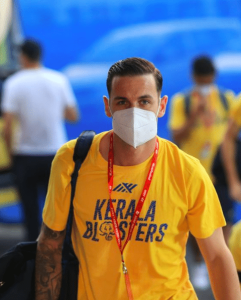 The Gurugram-based Indian casualwear and sportswear brand was announced as the Official Kit and Merchandise Partner of the club in July 2021 on a three-year deal. Apart from branding rights, the partnership sees SIX5SIX supply the club matchday and training wear while also producing club-themed merchandise.

Previously, SIX5SIX also served as the official kit supplier to the club during the 2018-19 season.

The Indian division of the Vevey, Switzerland-based confectionery giant signed a deal with KBFC in January 2022 to make Munch the Official Crunch Partner of the club for the 2021-22 ISL season. Apart from branding rights, the deal also entails collaboration over co-branded fan engagement activities.

The Mumbai-based Indian vitamins and supplements brand was announced as the Official Nutrition Partner of the club in October 2020. Apart from branding rights, the deal sees BodyFirst help the KBFC players with their nutritional needs.

The two parties last renewed their partnership in November 2021 to cover the 2021-22 season.

Based out of Cherthala, Kerala, Kinder Hospitals is a chain of hospitals and clinics operating across India and Singapore that specialise in women’s healthcare, with the group’s Indian Corporate Office located in Kochin and Head Office located in Singapore.

Kinder Hospitals has been the Official Medical Partner of the club since the 2019-20 season, providing any and all medical support they might require.

The two parties last announced an extension of their partnership in November 2020.

The Bangalore-headquartered electric scooters manufacturer was announced as an Official Partner of the club in January 2021. The two later renewed their partnership in October 2021 to also cover the 2021-22 season of the ISL.

The Mumbai-based sports-focused educational platform was announced as an Official Partner of the club in November 2021.

Sporjo aims to provide upskilling, mentorships, and other employability-focused opportunities to help one build an off-pitch career in sports. As per the KBFC partnership, apart from branding rights, Sporjo aims to leverage the association to facilitate such initiatives in the state of Kerala.

The Irving, Texas-headquartered IT and business consulting services and solutions provider was announced as an Official Partner of the club in December 2021.

Based out of Bangalore, Sporthood is an Indian sports company that aims to undertake and conduct community-level sporting projects all over the country.

As KBFC’s Performance Partner, Sporthood works with the club to run The Young Blasters Sporthood Academy, which is a grassroots-level venture from the two parties to support aspiring football-enthusiasts aged 5-15.

Based out of Newry, Northern Ireland, STATSports is a sports science company that specialises in wearable tech that helps athletes and teams with real-time stats monitoring and performance analysis with the help of metrics both basic and advanced.

STATSports was announced as the Technical Partner of KBFC in October 2020. The Blasters, hence, became the first Indian football club to partner with the sports science company, with the deal granting them access to STATSports’ tech for their own players’ analyses.