Michael Schumacher is probably the greatest Formula One racer ever. There are very few who would argue with that, and while statically there can be an argument, there is no argument when it comes to the German’s on-track skills.

Across his illustrious 21-year career, Schumacher won a total of seven world titles and 91 victories. Having raced for some of the sport’s most iconic teams such as Ferrari and Mercedes, the German has had more than quite a few stunning moments on track.

Today, we look at ten of the German’s finest on-track moments which set the Red Barron apart from anyone else. 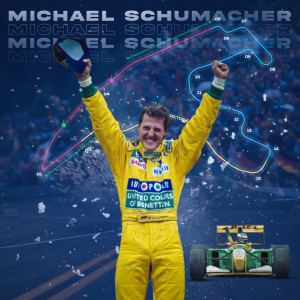 Spa has always been a special space for the seven-time champion. Apart from being the venue of his debut and where he clinched his record-breaking seventh title, Spa was also where Schumacher stood on the top step of the podium for the first time.

After shifting to Benetton in 1991, the 23-year-old German was up against the likes of Nigel Mansell and Ayrton Senna. Schumacher qualified a brilliant third behind Mansell and Senna.

Senna got off well and took the lead from Mansell, but when the rain came, the Brazilian stayed out, and by the time Senna rejoined after his pit stop, he joined at 12th place.

Schumacher, meanwhile, who had dropped to fourth place, made an ideal switch to slicks and snatched away the lead and even though Mansell fought back, reliability issues saw the Brit give up on his challenge for the victory.

With Mansell out of his way and Senna down the grid, Schumacher romped to victory, finishing a full 36 seconds ahead of second-place Mansell. 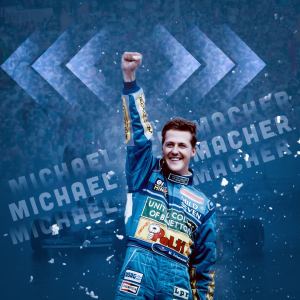 Even though Schumacher didn’t finish on the top step of the podium, this race makes a place on this list due to one of Schumacher’s greatest qualities which he showed throughout his career – the ability to keep pushing and never give up.

Although the German qualified on pole, he had to make an additional pit stop due to a gear problem that saw him stuck in fifth gear. But he didn’t let this affect him as he put in a Herculean effort around the Circuit de Catalunya and managed to hold on to his second position in fifth gear for 40 laps, showcasing a feat of concentration, skill and determination. 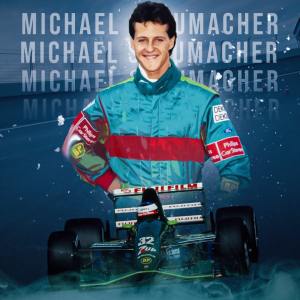 In one of the weirdest ways to make a debut, Schumacher got his first taste of Formula One when Jordan’s Bertrand Gachot was jailed for physical assault.

Gachot’s arrest meant Mercedes contracted a young German by the name of Michael Schumacher to stand in for the French driver. Schumacher, who was partnering the much-experienced Andrea de Cesaris, was straight on the pace and out-qualified de Cesaris, qualifying an impressive seventh.

The debut, though, didn’t last too long as Schumacher retired on the very first lap with clutch problems, but his raw pace and skill caught the eye of the entire paddock and he was signed up by Benetton soon after.

Records are meant to be broken – French Grand Prix, 2002 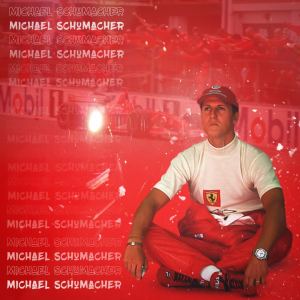 Ferrari’s early 2000s dominance was probably at its peak during the 2002 season. Heading into the French Grand Prix, out of the previous ten races that season, Schumacher had won an astonishing seven.

At the French Grand Prix, Schumacher drove a sublime race from P2, taking the lead from Juan Pablo Montoya, and was in a league of his own that race, and in fact that entire season.

Schumacher won his eighth race of the season, and along with it, secured his record-breaking fifth championship title, and he did it with six races to go.

The sheer dominance of the German that entire season was probably showcased best at Magny-Cours. 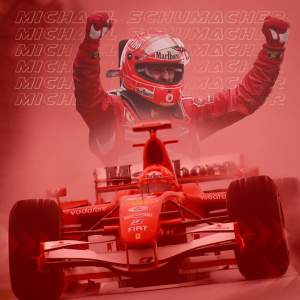 Schumacher’s final F1 victory came in China in 2006, where the German once again showed the world that only a daft person would write him off.

Just two races prior to the Chinese Grand Prix, it seemed like Renault’s Fernando Alonso would run away with the championship, having built up an eight-point lead with only five races left.

But Schumacher took full advantage of Alonso’s misfortunes in Italy. After leaving Monza with a victory, Schumacher headed into the Chinese Grand Prix only two points adrift of the championship leader.

Qualifying was disappointing for the German, as he qualified a distant sixth, especially given his championship rival qualified on pole. Alonso got away well from pole, but it was Schumacher behind putting in all the moves. After sweeping past his previous teammate, Rubens Barrichello, for fifth, Schumacher chased down Jenson Button for fourth on a wet track.

Alonso, meanwhile, had built up a 25-second gap to the German, but with the track drying up, Schumacher was gaining on Alonso at an alarming rate of knots, and when Kimi Räikkönen retired with a mechanical failure, Schumacher had only Giancarlo Fisichella in between himself and Alonso.

Alonso began to struggle on his set of tyres and came in for an additional pit stop and with Fisichella in the lead, Schumacher knew this was his chance for the win. Although Fisichella pitted and came out just in front of Schumacher, the German’s pressure right on Fisichella’s tail pushed the Italian into a mistake which saw Schumacher take the lead of the race.

Although Alonso tried to catch Schumacher, the German had built a big enough gap between himself and the Spaniard. Schumacher took what would be his final career victory and the then-record-breaking 91st victory.

Although luck would not be on his side for the last two races, Schumacher’s final win was one filled with everything that made the German great – the ability to comeback when all odds are against you. 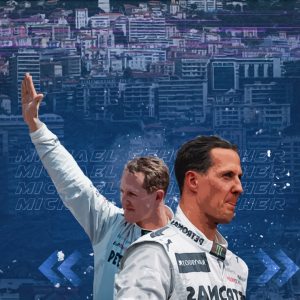 When Schumacher made his return to Formula One after three years away from the sport following his initial retirement, there was a lot of excitement in the paddock. Arguably the greatest of all time was returning to grid. Could he break even more records?

Although his three years with Mercedes didn’t go as planned, Schumacher was instrumental in setting up the team for the regulation changes that came in 2014 and the team’s dominance ever since.

Although he didn’t stand on top of the podium during his second stint, Schumacher did manage to take one podium place and a pole position.

At the 2012 Monaco Grand Prix, Schumacher turned back the clock and put in a mesmerising drive through the Principality, showcasing his shrewd knowledge of the track and managing to take his first pole since 2006.

Unfortunately, Schumacher couldn’t keep his pole as he took a five-place grid penalty for a crash from the previous race. But an entire generation once again saw the maestro at his best. 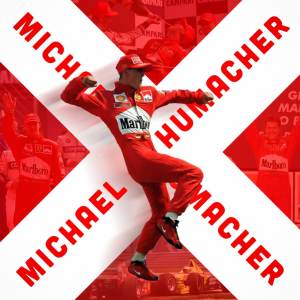 For any Ferrari driver, winning the Italian Grand Prix is probably the pinnacle, but winning it and equalling Ayrton Senna’s win record, that is something else.

In front of the Tifosi, though, Schumacher displayed his brilliance. Starting from pole, he led off the line and maintained his lead throughout the race. Although a Safety Car did manage to put Häkkinen within Schumacher’s reach, once the Safety Car pulled in, Schumacher romped into the distance with relative ease.

A sublime victory meant Schumacher was back on the top step of the podium having cut into Häkkinen’s championship lead and was now equal with the great Ayrton Senna for the number of career wins.

An emotional Schumacher, who generally is a composed individual, broke down in the post-race press conference, showing how much it meant to him – the victory, at his team’s home, and the effort put in by the team to stay in the championship fight with McLaren, and he had just equalled Senna’s record.

If there was one thing people took home that day from Monza, aside from Schumacher’s obvious brilliance, it was that even the King was human after all. 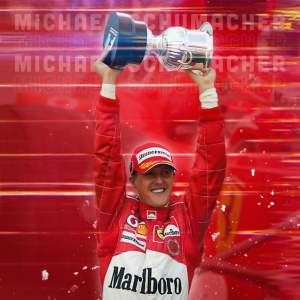 After qualifying second behind the Renault of Jarno Trulli, Schumacher was sandwiched between both the Renaults.

Schumacher had a disastrous getaway, losing positions to Alonso and McLaren’s David Coulthard in the opening lap. Shortly after, Kimi Räikkönen also passed the strangely slow Schumacher, who by now had fallen to fifth place.

The German eventually decided to slowly roll in those ahead of him, and after his first pit stop, Schumacher performed the perfect over-cut on Juan Pablo Montoya. The German once again put in a master class at Spa and breezed past the rest to second place behind Räikkönen.

Even though Räikkönen went on to take the win, Schumacher made a remarkable recovery following his opening lap disaster, which helped him seal a record-breaking seventh world title and a fifth on the trot with Ferrari. Quite fittingly, it was at the scene of his first victory and the venue where he had made his debut, thirteen years prior to the date. 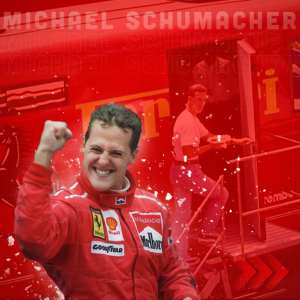 The race that gave birth to the ‘Regenmeister’ – the rain-master. In what is regarded as one of the greatest wet drives of all time, Schumacher showcased his wet driving skills which also earned him his first win with the Scuderia.

After qualifying third, almost a second behind Damon Hill’s Williams, Schumacher put in a master class on Sunday.

A poor start from Hill saw him spin twice on the opening lap, but Schumacher could not capitalise on it as he himself had a poor start.

On Lap 13, Schumacher took the lead from the other Williams of Jacques Villeneuve, who had started on the front row with Hill.

Once Schumacher took the lead, there was no catching him. A spotless drive saw him finish the race more than 45 seconds ahead of Jean Alesi, who finished second, cementing his place as one of the greats of the sport. 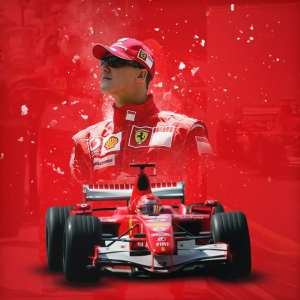 In his final race for Ferrari, and what would be the final one before his return from retirement in 2010, Schumacher went into the race with a lot on his shoulders.

Apart from this being his final outing with the Scuderia, which made it an emotional drive anyway, the German knew that he still had a slim chance in the championship battle, although it heavily relied on Renault’s Fernando Alonso not scoring and Schumacher having to win.

The hopes of going out with a record eighth title were quickly punctured, as were Schumacher’s tyres, by Lap Nine. Falling right back to the grid, although he saw his title hopes fly away into the distance, the German was not going to go out without a fight.

Schumacher put in a blistering comeback drive right from the back of the grid. Along with audacious overtakes and some vintage Schumacher race pace, the German, who was almost a lap down on the leaders, finished a respectable fourth, and even though he finished 10 points behind Alonso in the championship, he gave the Brazilian crowd one last glimpse of his magic before leaving the paddock for a couple of years.