Following are the companies and organisations that serve as sponsors and brand partners to Indian Super League club ATK Mohun Bagan (ATKMB) FC and enjoy a strong branding presence across their physical and digital assets. 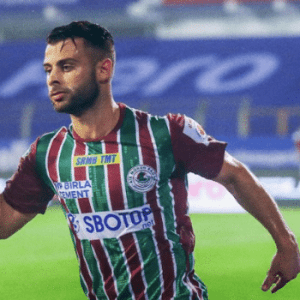 Betting company SBOTOP’s online news portal SBOTOP.net was announced as the Principal Sponsor of the club in November 2020 in a deal reportedly worth ₹3.2 crore. Since then, SBOTOP.net serves as the main front-of-matchday-shirt sponsor to the team. 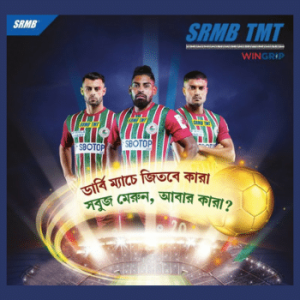 The Kolkata, West Bengal-headquartered steel-based construction equipment manufacturer serves as an Associate Sponsor to the club as well as one of their official matchday-shirt-chest sponsors (below shirt collar) since the 2020-21 season. 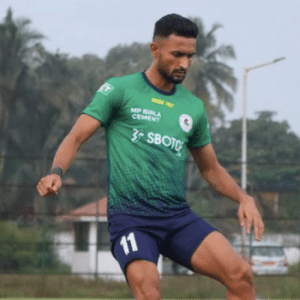 The Kolkata-based cement manufacturer was announced as an Associate Sponsor and the one of the official matchday-shirt-chest sponsors of ATKMB (on the front, opposite to the club’s crest) in November 2020.

MP Birla Cement was previously a partner of Mohun Bagan in the I-League as well, serving them as a sponsor from 2017 to 2020.

The Indian division of the Jeff Bezos-owned multinational giant also serves as an Associate Sponsor to the club. 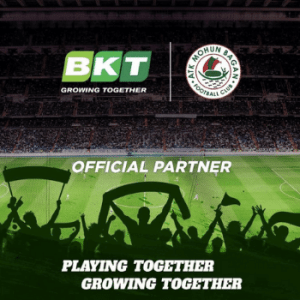 The mumbai-headquartered tyre manufacturer first partnered up with the club in November 2020. Later, in November 2021, the two announced an extension of their partnership, with BKT set to serve the club as an Associate Sponsor and the sleeve sponsor for their matchday shirts.

The CESC is an Indian electricity generation and distribution company headquartered in Kolkata. It is owned by the RP-Sanjiv Goenka (RPSG) Group and is Chaired by Sanjiv Goenka himself. The RPSG Group also owns a majority stake in ATKMB.

The RPSG Group connection sees the CESC serve as an Associate Sponsor to the club. Having served as the sleeve sponsor for their matchday kits in the 2020-21 season, the company serves as their back-of-matchday-shirt sponsor for the 2021-22 season.

The Jalandhar, Punjab-headquartered Indian sports equipment manufacturer was announced as the official Kit Partner of the club in November 2020, ahead of the 2020-21 ISL season.

The Navi Mumbai-headquartered apparel merchandise brand serves as the official Fan Wear Partner to the club. Apart from branding rights, the deal sees Shop The Area produce club-themed merchandise that can be bought from its online store.

As the Grassroots and Youth Development Partner of ATKMB, RFYS works with the club over several grassroots-level community projects to get people involved in the game of football.