Carlos Alcaraz Garfia is a pro Spanish tennis player. At the tender age of 18, the Spaniard is already considered as one of the hottest Spanish prospects since Rafael Nadal.

Alcaraz made his pro debut in 2018 at the age of 16 and already has one career title to his name (Next Gen ATP 2021). His major breakthrough came when he reached the quarter-finals of the 2021 US Open. He is also set to feature in the Australian Open.

The 18-year-old is estimated to have a net worth of around US$1m. Here we take a look at his endorsements and off-court brand deals.

Net Worth: US$2 million

Alcaraz already has a clothing and shoe sponsorship contract with Nike. In his amateur career, he was first sponsored by Lotto, and then in 2015 Nike swooped in.

Alcaraz signed his first professional contract with Nike in January 2020. On court, he is always seen wearing the Nike Air Zoom Vapor Pros on his feet. 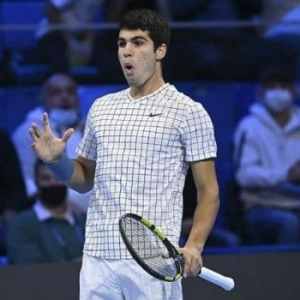 Alcaraz has a racquet sponsorship contract with Babolat. He uses the Babolat Pure Aero VS racquet with Babolat AeroPro Drive strings in the mains and Babolat RPM Blast in the crosses.

In 2022, Alcaraz added his name to the long list of tennis players who have had an association with Swiss watch manufacturer Rolex as its brand ambassadors.