Pusarla Venkata Sindhu is one of the most recognised names in India.

Having won gold at the 2019 World Championship and having become the first Indian female athlete to win two individual medals at the Olympics, worldwide success has made the badminton player hailing from Hyderabad a sporting icon in the country.

Aside from her on-court heroics, Sindhu is also one of the highest-paid female athletes, as reported by Forbes.

With Sindhu being a brand magnet, here we take a look at the shuttler’s endorsement deals over the years. 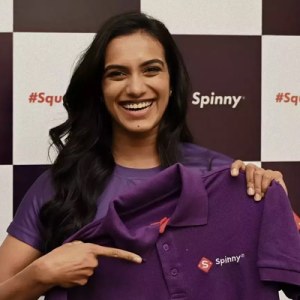 Spinny, an online to offline (O2O) retail platform to sell and buy used cars, roped in Sindhu as its brand ambassador in October 2021. Sindhu’s association saw her become the captain of Squad Spinny, with her also sporting the Spinny logo on her competition jersey. 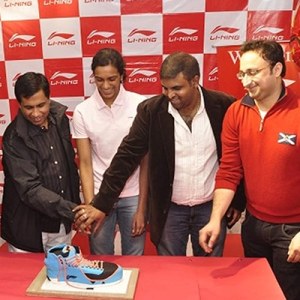 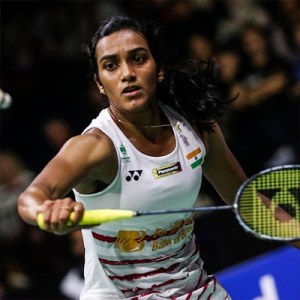 After Sindhu parted with Li-Ning in 2015, the Tokyo-headquartered company signed a multi-year deal with Sindhu, which also saw Sindhu become an ambassador for the brand. The deal was reportedly worth ₹3.5 crore per year.

Following the termination of their contract, Sindhu went back to sign a historic deal with Li-Ning. 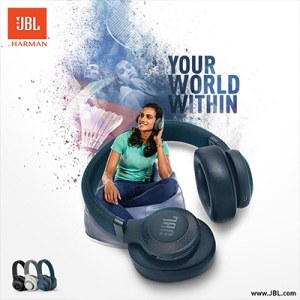 Samsung Electronics’ subsidiary Harman International signed Sindhu as a brand ambassador for JBL’s sports edition earphones in India. JBL launched four sets under its sports range — Run, Sprint, Jump and Dive — that were all headlined by the ace shuttler.

Since signing on with the company, Sindhu has been the face of JBL’s sports earphones in multiple marketing and television campaigns. 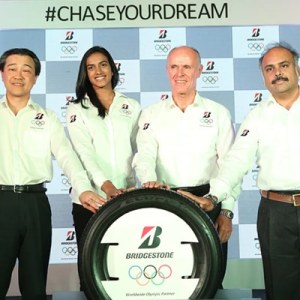 In August 2017, fresh off the back of her silver win at the World Championship, leading tyre manufacturer Bridgestone India announced that it had signed a multi-year deal with Sindhu, onboarding her as a brand ambassador.

Sindhu’s deal made her the company’s first brand ambassador. She was also included in Bridgestone’s activations around its Worldwide Olympic Partnership. 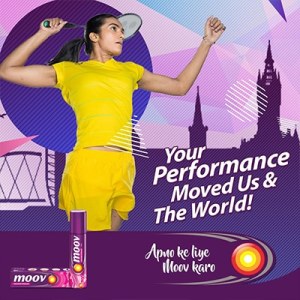 In 2017, Sindhu signed a multi-year partnership with British consumer goods company Reckitt, which saw her become the face of its pain-relief products brand, Moov.

Sindhu appears in multiple television campaigns for Moov and promotes and endorses the products on her social media platforms. 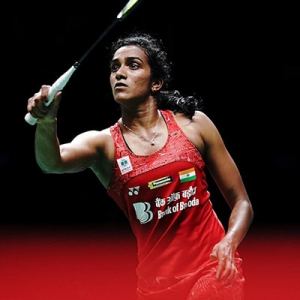 In October 2016, Sindhu signed a multi-year deal with Bank of Baroda, joining the bank as its brand ambassador. The deal was reportedly worth ₹8 crore.

As part of the deal, apart from appearing in advertisements for the bank, Sindhu also had the bank’s logo on her jersey. 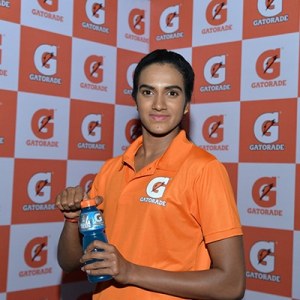 Sindhu teamed up with PepsiCo’s brand Gatorade India, joining as its brand ambassador and launching its #SweatMore campaign.

Since her partnership with Gatorade in 2017, Sindhu has been the face of multiple Gatorade advertisements over the years. 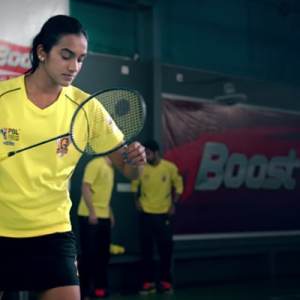 Sindhu inked a deal with one of the leading consumer goods companies, Unilever, in 2017. She was made an ambassador for one of its energy drink brands, Boost.

Sindhu has been the face of multiple Boost campaigns and has also played an active role in promoting the importance of health and nutrition amongst the younger generation with the brand. 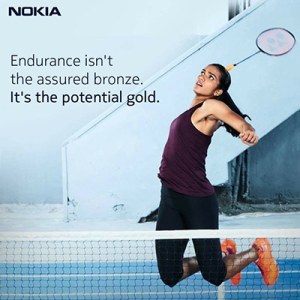 The ace shuttler signed a multi-year deal with Finnish telecommunications and electronics company Nokia in 2017. Along with Sindhu, Nokia launched its Nokia 3, Nokia 5 and Nokia 6 models. 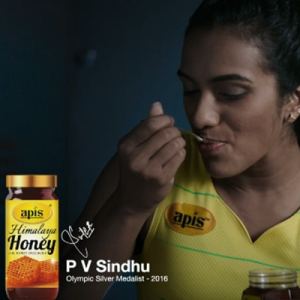 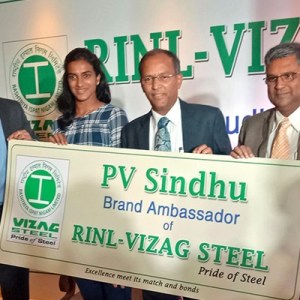 Following her Rio Olympics campaign, Sindhu became a brand ambassador for Vizag Steel. The deal sees the Vizag Steel logo present on Sindhu’s jerseys during domestic and international tournaments under the BWF.

The Central Reserve Police Force appointed Sindhu as its brand ambassador in August 2016.

Along with joining as a brand ambassador for the largest paramilitary force in the country, Sindhu was also given the honorary rank of Commandant, which is equivalent to a Superintendent of Police.

Sindhu often holds motivational sessions with the troops of the CRPF. 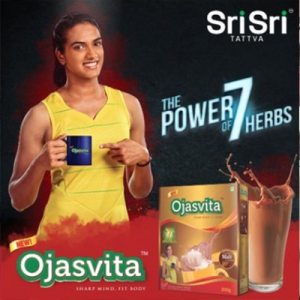 In October 2016, Sindhu was roped in as a brand ambassador for Ojasvita, a health drink of the Sri Sri Ayurveda brand. Since then, Sindhu has appeared in multiple marketing campaigns for the brand. 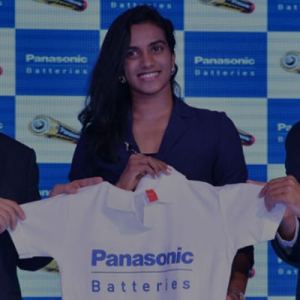 Sindhu joined Panasonic Energy in 2017, becoming a brand ambassador for the dry cell batteries and lighting products manufacturer. Sindhu’s deal with Panasonic was for a period of five years. 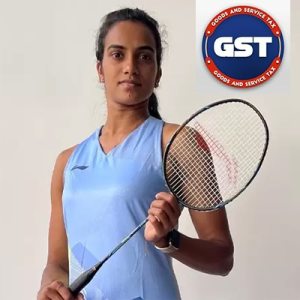 After the AP Legislative Assembly passed the State Goods Service Tax, which was a part of the GST Bill in 2017, Sindhu, along with Bollywood actor Amitabh Bachchan, was appointed as a brand ambassador. Sindhu appeared in multiple advertisements, educating the general public. 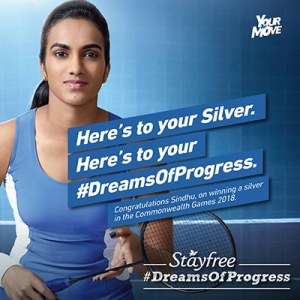 In March 2018, Sindhu joined Johnson & Johnson’s sanitary napkin brand Stayfree as its ambassador. She headlined the Dreams of Progress campaign.

Through her association with the brand, Sindhu strives to deliver the message that menstruation should never hinder one on their way to success. 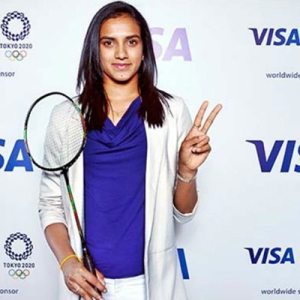 In September 2019, Sindhu signed with payment technology company Visa to become its brand ambassador on a two-year deal. Apart from promoting the brand, Sindhu was also a member of Team Visa for the Tokyo 2020 Games, which was a global athlete support program. 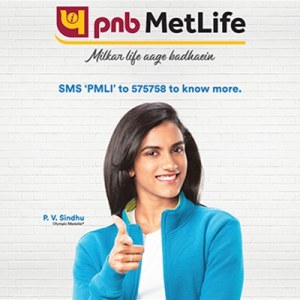 Upon joining, Sindhu launched the #ShedTheWait campaign, which was focused on sending across the message that one shouldn’t have to wait for a partner to fulfil their responsibilities. 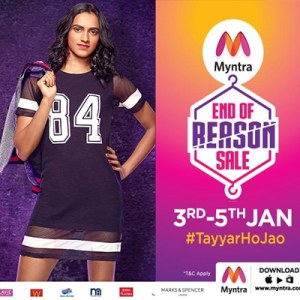 Sindhu has been an ambassador for leading online fashion store Myntra since 2016. Since appearing in Myntra’s End of Reason Sale ad campaign in 2016, the shuttler has made several more appearances across multiple advertisements for the brand.