The current No.1 T20I side, last season’s ODI World Champions and a prominent Test team – the England men’s national cricket team are at their peak at the moment. Be it the Ashes or an IPL match – England players never leave any stones unturned in playing to their abilities and making the ECB a proud governing body.

Here’s a list of all of England and Wales Cricket Board’s sponsors. 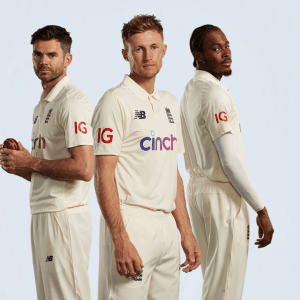 Online trading and investments company IG was declared the official sponsor of the England’s national men’s and women’s cricket teams in May 2021. The three-year partnership with the ECB sees the London-based organisation’s logo appear on the sleeve of the men’s side’s playing shirt across all the three formats of the game.
This deal makes IG one of three brands to feature on the men’s shirt alongside kit supplier New Balance and online car seller Cinch, which the ECB announced in February 2021 would be replacing NatWest as its new principal partner. 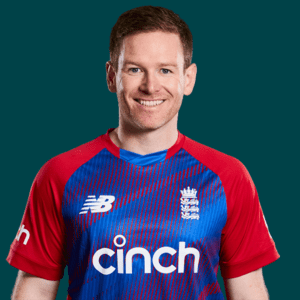 Cinch is an innovative e-commerce business and is one of Britain’s fastest-growing online used car retailer. It took on the role of a Principal Partner of the ECB in February 2021. Cinch replaced NatWest, who had a four-year deal with the ECB ending in April 2021.
As a part of the multi-year agreement, Cinch gathers attention on the team kits across all formats of the game. The contract between the two parties is reportedly worth £6.5 million per season 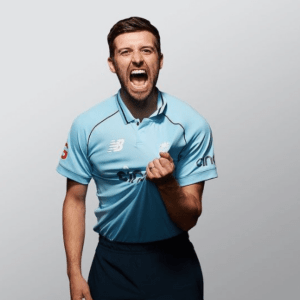 In 2017, ECB signed a five-year deal with American sports footwear and apparel brand New Balance. The latter serves as the Official Kit Supplier to ECB and the England cricket teams. The agreement includes providing match and training wear to all England teams, including the men’s and women’s Test, One-Day and T20 sides, and the Lions and all four England disability teams.

Royal London is the competition partner of the ECB in One-day cricket at the international, county and recreational level. It is considered to be one of the UK’s largest mutual life and pensions company and has been in agreement with the ECB since 2014.
In 2017, the two parties renewed their sponsorship deal for two years, and similarly in 2019, the deal was extended in another multi-year agreement. The ECB compensates by organising the famous Royal London Cup for List-A cricketers in England.

Vitality, an innovative health and life insurance company, has been serving the ECB as the competition partner since 2013 at both international- and domestic-level T20 tournaments.
In 2018, the deal between the two parties was extended for four more years. Vitality not only has access to venue advertising and hospitality rights but can also utilise all ECB cricket players for content creation purposes. Other various grassroots T20 competitions organised by the ECB are also sponsored by Vitality.

LV=, an insurance company, is the competition partner for England Men’s and Women’s Test cricket teams.
Back in 2002, LV= signed a deal as the title sponsor of the County Championship which ended up being a long-term partnership that ended in 2015.
In January 2021, LV= came back on board, replacing Specsavers, whose deal came to an end in 2019, leaving the ECB without a title sponsor. LV= is now the title sponsor for both International Test cricket and the County Championship until 2023.

The ECB pulled off a deal for kit partnership with British sportswear brand Castore in September 2021. According to reports, the deal is worth £25 million over ten years.
Castore, who is also the kit sponsor for the West Indies Cricket team, replaces US-based New Balance, which signed a five-year contract with the ECB in 2017.
The brand-new England cricket kit will be made of natural fabrics, which is expected to make it the first-ever completely recyclable sports collection.
PLEASE NOTE – The partnership will see Castore become the Official Kit Supplier for the English cricket teams from April 2022.

In May 2021, Unilever’s soap brand Lifebuoy was announced as the Official Hygiene Partner of England Cricket in a multi-year deal. The deal sees Lifebuoy’s products supplied at the matches and hotels during tournaments. All recreational cricket clubs are being provided with subsidised kits for safety and sanitisation as well.

In 2020, live cricket made a comeback to BBC Television as part of ECB’s whopping £1.1 billion combined media rights deal which runs from 2020 to 2024.
The live TV coverage deal has been extended beyond the initial agreement that ran until 2019, and complements the extensive BBC offering across radio (of all home internationals and domestic competitions), TV highlights of England men’s and women’s internationals along with digital clips of England matches and domestic competitions.

Sky Sports agreed to a five-year deal with the ECB in June 2017 to broadcast England’s international and first-class matches played at home. The new media rights deal between Sky and the ECB saw their prestigious collaboration enter its third decade.

The ECB announced a partnership with Microsoft in February 2021 that would take on the responsibility to develop the sport at all levels – from elite to the grassroots. Included within the set-up was a digital skill training program which would be provided to grassroots cricket organisations over the coming years, with the initiative set to tie into Microsoft’s ‘Get On’ campaign, which has set its eyes on helping 1.5 million people find a sustainable career in technology by 2024.

Sponsors of The Hundred