Here at SportsKhabri, we are bringing a brand new ‘private’ fantasy premier league (FPL) for our readers and fellow football fanatics. Compete against your friends and similar-minded FPL enthusiasts in our private league “Blood, Sweat and Beers!!!” and stand a chance to win exciting prizes, ranging from weekly and monthly rewards, to the ultimate end of the season grand winnings.

All you have to do is join our league via the “code” provided below and show us the FPL genius in you. Apart from this, we’ll also be conducting regular “Clubhouse” sessions discussing the major points from each Gameweek, the biggest gainers and the biggest losers, and many more with our readers and followers. That being said, let’s take a look at some of the rules for our fantasy league:

There will be no set deadlines to join the league for the first few phases since we’ll be giving away weekly and monthly rewards. If you’re a late entrant for the traditional league but have the brains to churn out high-scoring teams week-in and week-out, we offer you a fair shot at glory. While we’ll suggest you join with one team only, as multiple entries just for the sake of rigging the weekly and monthly contests won’t be tolerated, and participants are expected to maintain the integrity of the league by abiding by these rules.

Moreover, new entrants will not be accepted from Gameweek 17 as we need a fixed number of teams for the League Cup which will be starting from Gameweek 18 onwards. While for teams who are here for the endurance battle – “The Traditional League”, scoring starts from Gameweek 1 and your final call to submit your teams will be 11:00 PM 13th August.

All changes to your team (starting 11, transfers, captain changes, substitution priorities) must be made by the Gameweek deadline in order to take effect for that set of matches.

Deadlines are subject to change and will be 90 minutes before the kick-off time in the first match of the Gameweek. 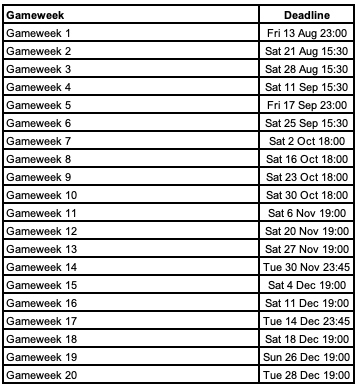 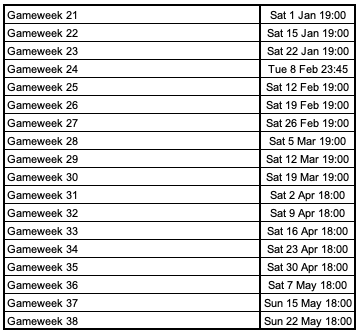 During the season, your fantasy football players will be allocated points based on their performance in the Premier League. 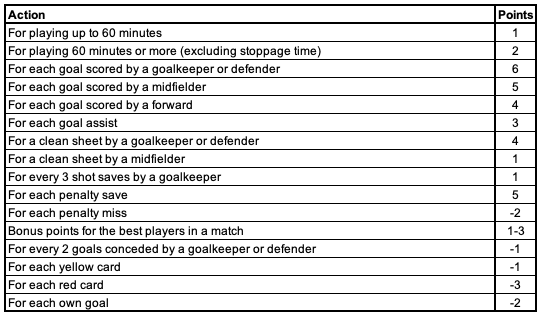 A clean sheet is awarded for not conceding a goal whilst on the pitch and playing at least 60 minutes (excluding stoppage time).

If a player has been substituted when a goal is conceded this will not affect any clean sheet bonus.

If a player receives a red card, they will continue to be penalised for goals conceded by their team.

Red card deductions include any points deducted for yellow cards.

Assists are awarded to the player from the goal scoring team, who makes the final pass before a goal is scored. An assist is awarded whether the pass was intentional (that it actually creates the chance) or unintentional (that the player had to dribble the ball or an inadvertent touch or shot created the chance).

If a shot on goal is blocked by an opposition player, is saved by a goalkeeper or hits the woodwork, and a goal is scored from the rebound, then an assist is awarded.

If a player shoots or passes the ball and forces an opposing player to put the ball in his own net, then an assist is awarded.

Assist points awarded by Opta within Fantasy Premier League are calculated using additional stats which may differ from other websites. For example, some other sites would not show an assist where a player has won a penalty.

For the avoidance of doubt, points awarded in-game are subject to change up until one hour after the final whistle of the last match of any given day. Once the points have all been updated on that day, no further adjustments to points will be made.

The Bonus Points System (BPS) uses a range of statistics to create a BPS score for every player. The three best performing players in each match will be awarded bonus points. 3 points will be awarded to the highest scoring player, 2 to the second best and 1 to the third.

Examples of how bonus point ties will be resolved are as follows:

If there is a tie for first place, Players 1 & 2 will receive 3 points each and Player 3 will receive 1 point.

If there is a tie for second place, Player 1 will receive 3 points and Players 2 and 3 will receive 2 points each.

How is the BPS score calculated?

Players score BPS points based on the following statistics (one point for each unless otherwise stated): 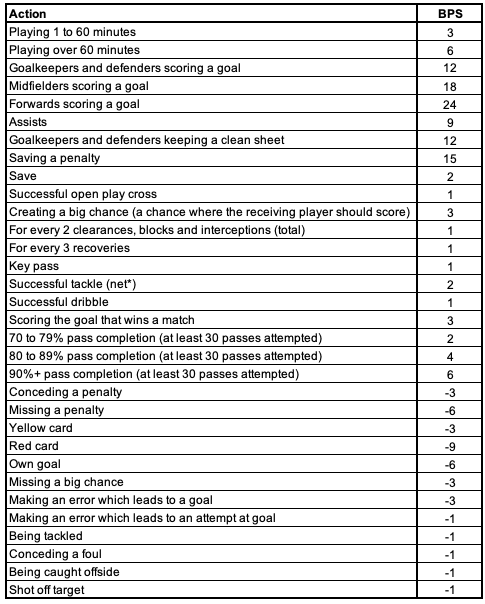 Here, we will follow the traditional scoring system to test your skills just that little bit more. It’s a test of your knowledge, analytic ability and patience for the entire season.

In a league with classic scoring, teams are ranked based on their total points in the game.

In the event of a tie between teams, the team who has made the least amount of transfers will be positioned higher. Any transfers made using a wildcard or free hit will not count towards total transfers made.

Classic scoring leagues are run over a number of phases: 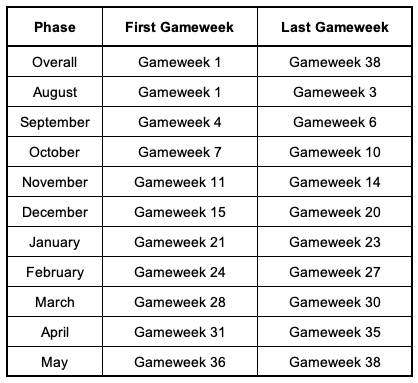 While if you’re one of those who like the “Smash N’ Grab” philosophy, don’t worry, we’ve got our bases covered.

Starting this season, FPL has introduced a new format where the private leagues will be able to stage their own cup events. The League Cups will start in the second half of the season depending on the strength of the league and will conclude in Gameweek 38. All managers will be entered into the cup competition. The starting round will be determined by the number of teams in the cup competition, while the final will be contested in Gameweek 38.

Each qualifying team will be randomly drawn against another in the first round. The winner (the team with the highest Gameweek score minus any transfer points), will progress to the second round and another random draw, the losers are out! This process continues until the final Gameweek when the two remaining teams contest the cup final. With the winner and runners-up getting rewarded.

If a cup match is drawn, then the following tie-breakers (priority: top to bottom) will be applied until a winner is found:

Use the code above and join with your teams before you miss the deadline for Gameweek 1, the competition is only expected to heat up with the 21/22 season looming large. Our team here at Sports Khabri will be posting regular content to help the managers navigate through the process and build their teams.

For any further queries, mail us at [email protected]