India’s Jehan Daruvala created history on 6th December 2020 to become the country’s first driver to win the Formula 2 race. His success was seen during the Sakhir Grand Prix held in Bahrain before being spun off the track at the Bahrain Circuit by a competitor. His misfortune wasn’t as spectacular as what occurred in Formula 1 that was followed by the Formula 2 event. Romain Grosjean, the F1 Haas driver, had to crawl out of an inferno as his car split in two following a crash on the race’s first lap.

While Romain Grosjean’s crash might have been the talking point this F1 weekend, Daruvala had a talking point of his own. Daruvala, who races for Carlin, edged past Mick Schumacher, Yuki Tsunoda, and Dan Ticktum in the support race of the season-ending F1 Grand Prix to secure his first podium finish, in what is his maiden season.

Daruvala won the sprint race in Sakhir, Bahrain, by 2.9s as he and his Carlin teammate Tsunoda finished 1-2. Ticktum was overtaken by Tsunoda late in the race as he finished 3rd on Sunday’s spectacular race. 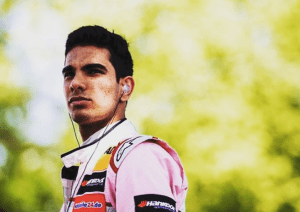 The race saw Carlin’s driver, Daruvala, display intelligence, pitting early on a track that was brutal on tires, to get ahead of the drivers who waited to take their mandatory pit stop. He also showed incredible defensive skills in keeping out Mick Schumacher for the last twelve laps.

Daruvala finished at the 12th spot of the F2 Drivers Standings, but the 22-year-old looks to mount a title challenge next season. Mick Schumacher, son of the legendary Michael Schumacher, will be join Haas at F1 as the reigning F2 champion next season as he sealed the F2 title despite missing the podium on Sunday.

For Daruvala, the maiden podium finish wasn’t nearly enough on his 21st start of the season. He said, “It felt good to get on the podium, but my goal isn’t to have one podium finish in a year. It is to be consistently on the podium. It’s to finish in the front and continuously finish at that podium throughout the year.”