Let’s talk about the ever-chaotic, invariably-loved owners of our hearts and the reason for our heart problems — the Indian women’s cricket team.

2022 has been an eventful outing for the Women in Blue — some retirements, some controversies, some records broken and some hearts stolen. We are sailing on this choppy blue ocean, with consistent crests and troughs, and even though we may get seasick at times, it’s a ride we’re on for life.

Here are some standout moments—both highs and lows—involving the BCCI and its second favourite senior national cricket team.

March: Not four, but five years in the waiting, and the swansong of two Indian legends — it was the 2022 ICC Women’s ODI World Cup.

We cannot even say that India had a tough group, because everyone played everyone and the top four made it to the semis. We defeated the West Indies and both Asian sides in Pakistan and Bangladesh with ease, but when it came to the SENA countries, our sena lost each battle, ultimately bowing out from the larger war.

From reaching the final in 2017 to not making the final four in 2022 — it was a bitter disappointment. I’ve heard the jersey the team wore being referred to among fans as “group stage exit jersey” as opposed to “2022 WC jersey”. We also lost the ODI series against New Zealand prior to the tournament, so the first quarter of the year had no celebrations. Such is sport.

August: Following T20I and ODI series wins against Sri Lanka in Sri Lanka, India were riding a wave of momentum. The Commonwealth Games is an event many look forward to, and with women’s cricket in the mix I can speak for myself — my year was made.

With eyes set on a medal (preferably gold), Team India made their way to Birmingham. I say bring back the JSW jerseys because that might just have been their lucky charm. From Deepti Sharma’s diving catches, Radha Yadav’s famous run-outs, Smriti Mandhana’s superb fifties, Harmanpreet Kaur’s monstrous hits to Renuka Thakur’s rippers, Jemimah Rodrigues’s blade blighting Barbados, the semi-final supremacy against Nat Sciver and the all-round entertaining and effective cricket, India had quite a run at the CWG.

We did fall nine runs short in the final, though. Here’s a riddle: What’s the similarity between playing a game of Jenga and watching the Indian women’s cricket team bat? In both situations, one must mentally prepare themselves for a collapse at any time. The jersey luck wore off just 30 minutes too soon and the gold slipped from our hands. The campaign overall, though, was a win in my books, and a definite high point of the calendar year.

It feels strange categorising this under a “low” when they have played a record 43 internationals in this calendar year — the most ever in their history.

18 ODIs and 25 T20Is. No test matches. Almost half of these limited-over matches, though (20, to be exact), were part of major tournaments—ODI World Cup (7), CWG (5), Asia Cup (8)—which meant that the BCCI organised just 23. Just five of those 23 came at home, when Australia came to Mumbai for some December T20Is, the sea breeze and a trip to Elephanta Caves (more on them later).

The Indian men’s team played 71 internationals in 2022, which included 7 Test matches. Surely, in a year with three major tournaments and no Test matches, the women deserved many more outings to rotate players, try combinations and work out kinks before tackling teams on the biggest stage. More home matches with some good marketing certainly wouldn’t hurt. A girl can dream.

[Thanks to Vinayakk, Kausthub and Mohit who helped with various stats in this paragraph, I really struggle to find numbers and verify them.]

October: On the back of a historic ODI series win in England, a commanding Asia Cup campaign and the subsequent trophy lift, the BCCI announced that its contracted female cricketers would receive identical match fees to their male counterparts.

With ₹15 lakh per Test match, ₹6 lakh for each ODI and ₹3 lakh as compensation for every T20I played, India became the second nation after New Zealand to implement the equal match fee policy — a good step towards eliminating the gender disparity in the sport.

The player retainer fees are still unequal, however. As are the matches played by the men’s and women’s teams in a calendar year.

Low: Facing the World Champions without Head and Bowling Coaches

December: What? We’ve invited the Goliaths of Australia to our backyard and ousted the Head Coach days before the series? Not the kind of dismissal you expect during cricket.

I’m not categorising the move as a low point, but the fact that it got to that level is certainly one. Reports later uncovered lack of trust, growing differences and miscommunication between senior players and the coach, which reached its tipping point. Surely some relief was sought when the deed was done, but the leadership were left having to adjust very quickly.

There was minimal promotion or marketing revolving around the first home series in over a year. Tickets? No news till the day-of. Advertisement in the paper? None till the day-of. Series hashtag with the title sponsor was #HalkeMeinMattLo (“Dont take us lightly”) and I most certainly passed out in the local train hit with the irony of that slogan.

The Aussies won the series 1-4. Of course they did.

High: Record crowds attendance DESPITE all of the above

December: Continuing on with that series. I was fortunate enough to attend all five matches in person. 25,000+ at DY Patil on a weekday during the first match. Australia won by a convincing 9 wickets. 45,000+ stormed in for the next match, on a breezy Sunday evening, determined to see a win. They were rewarded with a total of 410 runs scored and a super-over victory for India. A deafening crowd which “easily beat the 85,000 at MCG in 2020” said Jemi in a post-series media interaction with Sportstar.

The next three were hosted at a run-down Brabourne stadium (a rant I will save for a later day) and filled in larger and larger numbers each time. We lost all three games, but the crowd was thoroughly entertained.

Hey BCCI, we really do love watching our women’s team in person. Host more series, talk about it, sell tickets — as they deliver, so shall we.

Ending this piece on an author’s choice high, it’s got to be *that* Deepti Sharma moment. The true “Don Deepti” dawned on the cricketing world when she ran Charlie Dean out as she attempted to steal some yards before the ball was delivered. Deepti single-handedly broke Twitter. I knew she was a bosslady already, but on that day, the rest of humanity found out too. Jhulu di will remember her retirement ODI for life.

Looking ahead: While Jan–Feb 2022 saw just seven matches for the Indian women’s side, Jan–Feb 2023 looks very different. The Inaugural U19 Women’s World Cup, a senior team tri-series, followed by the T20I World Cup.

Brace yourselves folks, the ocean is about to get choppier. All aboard. 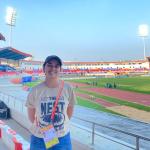