Here, we have look at the detailed information about Emma Raducanu’s endorsements, sponsors, playing career, as well as her playing style and achievements..

Turning professional at the age of 16, Emma Raducanu had to wait three years before making her WTA and Grand Slam debuts in 2021.

The young Brit made her WTA debut at the 2021 Nottingham Open but lost her opening match to compatriot Harriet Dart. Her next appearance was a wildcard entry at the 2021 Wimbledon where she had a promising stint before retiring from her fourth-round match. In reaching the fourth round, Raducanu became the youngest British woman to reach the last 16 in the Open Era.

Following her impressive Wimbledon show, Raducanu went on to reach the finals of the WTA 125 tournament in Chicago where she lost in the finals, but her promising performances saw her reach a career high ranking of 150.

Raducanu took the tennis world by storm when she won the US Open 2021, becoming the first British female to win a Grand Slam in 44 years. What made her win even greater was the fact that the British star won the tournament without dropping a single set in the entire tournament.

An aggressive baseliner, Raducanu has an attacking style of play. Known for the numerous winners, Raducanu hits the ball early on the rise and is quick to redirect the power down the line as well. The Brit’s signature stroke is her two-handed backhand. She has also been successful with her flat and hard groundstrokes.

Raducanu also has a strong forehand and has a strong serve at 110 mph. She is also agile on her feet, which helps with court coverage, speed, footwork and anticipation to counter against her opponents. She is also handy at the net and has an effective drop shot. 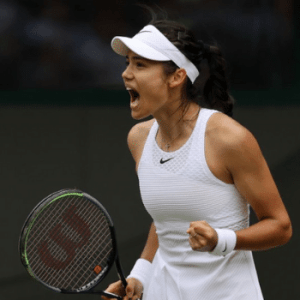 The young Brit has an apparel and footwear sponsorship deal with American sportswear giant Nike.

As part of her sponsorship, Raducanu sports Nike jerseys and shoes on court and advertises the brand’s products on her social media channels. 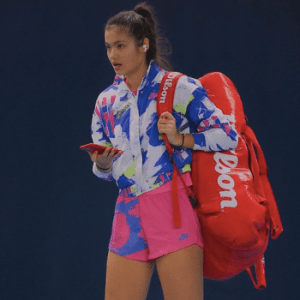 Raducanu has a sponsorship deal with Wilson which sees the Brit currently use the Wilson Blade 98 racquet on court. 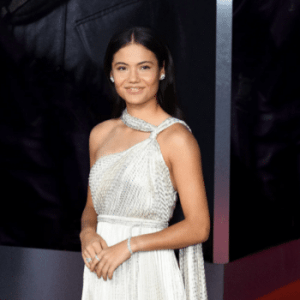 Raducanu signed a partnership with French fashion brand Dior in October 2021 that saw the rising tennis star become one of Dior’s brand ambassadors. The deal was reportedly worth £2 million. 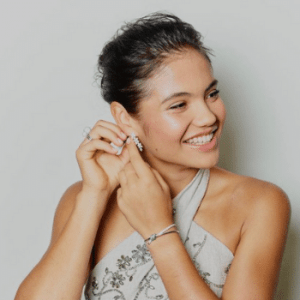 Following her historic US Open triumph, iconic US luxury jewellery brand Tiffany & Co. was the first major brand to sign on the teenager as a brand ambassador, in September 2021.

Prior to the partnership, Raducanu had worn Tiffany pieces throughout the 2021 US Open tournament. 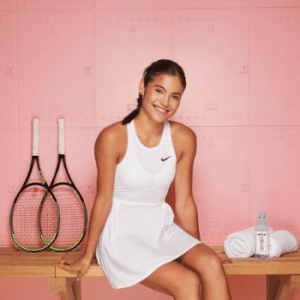 Bottled water brand Evian roped in the rising tennis sensation as its global brand ambassador in December 2021.
As the global face of the brand, Raducanu headlines Evian’s campaigns and endorses its product on social media as well. 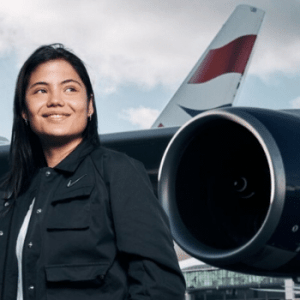 In December 2021, Raducanu was revealed as the global brand ambassador of the flag carrier airline of the United Kingdom, British Airways.
The deal sees British Airways fly the star across the world for her tournaments and training sessions while the tennis star will also headline their media campaigns.

Raducanu was roped in as a Brand Ambassador of car manufacturer Porsche in March 2022. The partnership sees the British tennis star endorse the brand and be a face of its various global campaigns.

Raducanu was roped in as a brand ambassador for telecommunications firm Vodafone in March 2022. Raducanu kicked off her partnership with Vodafone through the ‘Play your Way to Wimbledon’ grassroots event while also having Vodafone as her choice of network during her travels around the world during the season to stay in touch with family and friends. She also sports the Vodafone logo on court.

In June 2022, HSBC announced Emma Raducanu as its brand ambassador following a four-year deal between the two parties. The partnership uses Raducanu’s profile to raise financial awareness among the younger generation.