Following are the companies and organisations that serve as sponsors and brand partners to Indian Super League club Jamshedpur FC and enjoy a strong branding presence across their physical and digital assets.

India’s oldest bank, State Bank of India, entered for the first time in its history the Indian football industry and signed a landmark agreement with Jamshedpur FC in November 2021 that made the bank the principal sponsor of the football club for the 2021/22 season.

This agreement took place in the presence of senior officers from SBI, Tata Steel, and JFC. This partnership took place due to the close-knit relationship between SBI and Tata Steel Group.

Ashwin Bhatia, Managing Director of SBI said, “There have been rapid strides in Indian football over the past decade, especially with the advent of the Indian Super League. Tata Steel has been at the forefront of promoting football and has continuously produced champion players over the past three decades via the Tata Football Academy. JFC is a step ahead in the same direction and the packed stands, every year, at the JRD Tata Sports complex speak volumes of the popularity of football amongst its legion of fans. Not just that, but, JFC has done incredible work in the grassroots, youth football and coach education, all the while engaging with these fans. We also have a long-standing relationship with Tata Steel and the Tata Group and this partnership will help us to promote sports and more specifically football. These reasons made our decision very simple to partner with JFC, one of the top professional football clubs of India.” Tata Motors is a global automotive giant and has a history of various associations with the biggest sporting events taking place in India, which also included a partnership with the IPL in 2021.

The automotive company has been a partner of Jamshedpur FC since their debut season in the ISL (2017-18). For the 2021-22 season, this association will see Jamshedpur FC promote India’s first sub-compact SUV, Punch.

The Punch logo will be visible on the sleeves of Jamshedpur FC’s jerseys, their digital platforms and also in their home stadium for the season, GMC Athletic Stadium Bambolim in Goa.

The city of Jamshedpur is home to Tata Motors, and the company is proud to be associated with its city’s team and form synergies with one of the elite teams in the ISL. 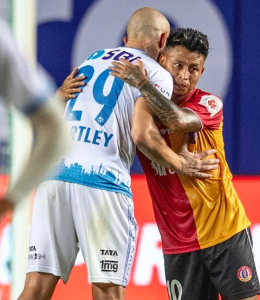 Tata 1mg is India’s leading digital healthcare platform. It enables easy access to a wide range of medicines, health and wellness products, diagnostic services and teleconsultation to its customers.

Tata 1mg is the official health partner of Jamshedpur FC for the 2021/22 ISL season. It will have its logo on the official match shorts of the Jamshedpur FC players and, similar to Tata Motors, its logo will also be visible in the club’s home stadium and also on all their digital platforms.

Jamshedpur FC and Nivia continue the strong partnership they forged with each other since the club’s formation in 2017.

Nivia was formed 87 years ago under the ownership of parent company Goodwill Sports Ltd, and has since left a strong mark not only in India but also across multiple Asian sports. It is widely regarded as the most trusted Indian sports brand.

Rajesh Kharabanda, Managing Director – NIVIA, was glad to continue this vibrant association as he said, “For us at NIVIA, it’s a no-brainer. With Jamshedpur FC, we have polished an amazing partnership over the years. When the club was established in 2017, the association formed back then was with the view of having it for a long-term and we are glad to be on board with the club for another two years. The club has the ambition to succeed and we want to be part of that journey with them.”