After a stellar junior career that saw her become World No. 3 and take home multiple Grade 1 titles at the ITF Junior Circuit, Elena Rybakina turned professional in 2016 at the age of 17. She started the year strongly on the ITF Women’s Circuit, reaching three singles finals and two doubles, winning both her doubles finals.

Rybakina entered her maiden Grand Slam qualifying draw at the 2018 US Open. She switched from ITF events to the WTA Tour in 2019. She made her Grand Slam debut at the French Open the same year but lost her qualifier to Kateřina Siniaková. Although she failed to qualify for the Wimbledon that year, she qualified for her second Grand Slam at the US Open 2019.

A disrupted 2020 season saw Rybakina reach the finals of four of the opening five WTA Tour finals while ending runner-up at the Shenzhen Open. She took her second WTA trophy at the Hobart International. After the resumption of tennis following the pandemic, she took a win at the US Open and ended as runner-up at the Internationaux de Strasbourg.

2021 saw a better Grand Slam start for Rybakina as she reached a career-best quarter-final appearance at the French Open and also entered the top 15 rankings in the world.

At the Sydney International Classic 2022, Rybakina shocked reigning US Open champion Emma Raducanu in the opening round in straight sets. A persistent injury meant she had to forfeit her next round game in order to give her body time to recover for the Australian Open. 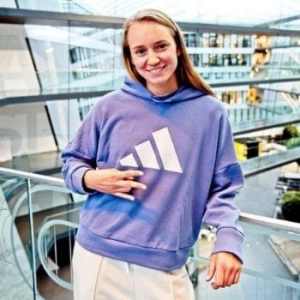 Rybakina joined forces with Adidas in January 2020. The deal sees the German giant sponsor Rybakina’s apparel and shoes for all her on-court and off-court engagements.

Prior to signing with Adidas, Rybakina was sponsored by Nike. 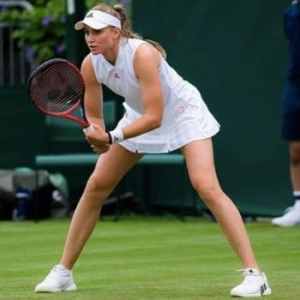 Since the early days of her career, Rybakina has used the Yonex racket on the court, and she currently uses the Yonex VCore 100 racket.