Home Cricket Dhoni vs. Virat: Who is a Better Captain?
CricketNews

Dhoni vs. Virat: Who is a Better Captain?

Cricket is a religion in India. However, such a popular sport leaves room for debates between various teams and players. While every cricket supporter can agree upon Sachin Tendulkar being the best player in Indian cricket history, there is one ongoing debate about who is a better captain between Mahendra Singh Dhoni and Virat Kohli.

Let us compare the two over the debate revolving around them while celebrating their glorified careers.

Perhaps the most extraordinary wicketkeeper in cricket history, Dhoni is a generational talent. Known for his calm demeanor, he is also one of the most successful captains in cricketing history.

Mahi didn’t score big initially but soon found his form and became famous for his big hits. He made his mark with a knock of 148 off 123 in his fifth ODI at Vizag against Pakistan. Since then, he has become a center of India’s ODI set-up.

He then took charge as a captain of the Indian cricket team in the Inaugural T20 World Cup in 2007. He later took the lead in all three formats (ICC T20 World Cup 2007, ICC World Cup 2011, and ICC Champions Trophy 2013) and became the only captain to have all three in his cabinet.

Currently retired from international cricket, Mahi is still regarded as the best finisher in the game.His calculated knocks often proved to be the difference in clutch games.

Despite being derided for his lack of technique, Captain Cool has revolutionized cricket in India.

Let us look at his record in all the formats. 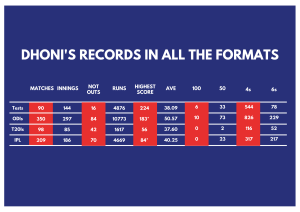 The current Indian captain,Virat Kohli, is arguably the best batsman in the world right now.His ability to score runs at critical moments makes him a world-class cricketer.

Kohli has had a decent amount of success as a captain. He took up captaincy in 2017 and has led team India to the knockouts in the 2017 ICC Champions Trophy and 2019 ICC Cricket World Cup and is now eyeing an ICC trophy.

Though Kohli has proved himself by leading India to the number one spot in the Test rankings, his inability to lead team India and RCB to the top in the IPL haunts him.

Let us take a peek at Kohli’s records in all formats. 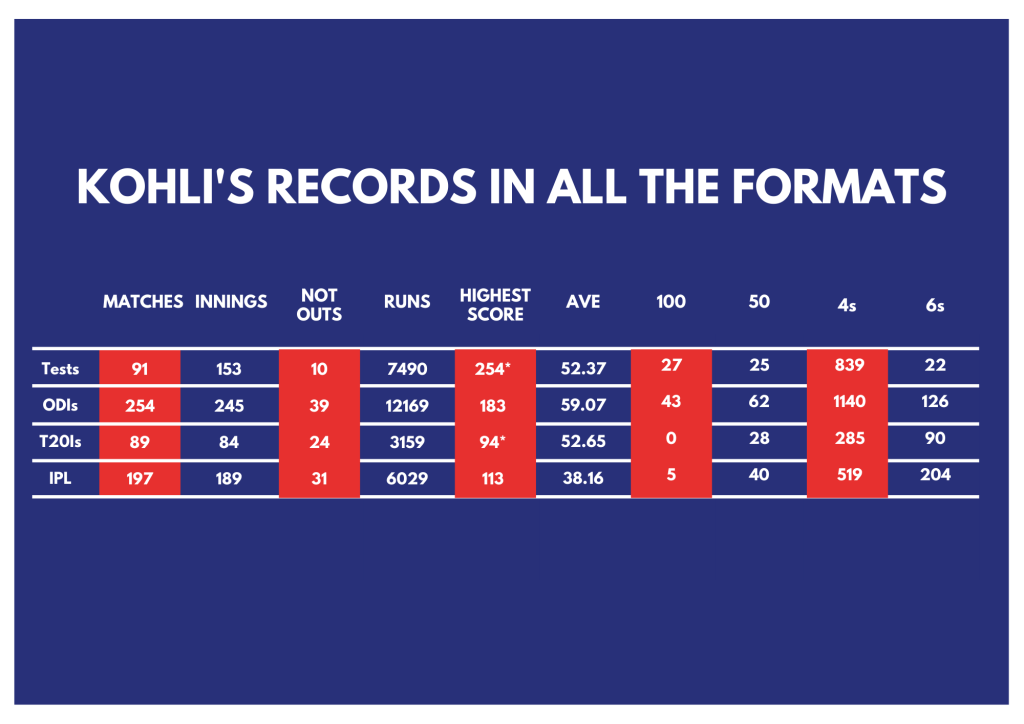 With a brief history of how Dhoni and Kohli’s careers have panned out, the discussion of who is a better captain between them can be divided into three broad sections.

Kohli and Dhoni have massive popularity. While Kohli’s ability to slam runs like Tendulkar makes him a big hit among the people, Dhoni relies on crucial moments. Dhoni’s Chennai Super Kings (CSK) is arguably the most popular team in the IPL.

Both, Kohli and Dhoni have been very successful as captains of the Indian team though Kohli has the edge over his predecessor in the Test format.Kohli has won 23 matches out of the 39 that he played as a captain. Kohli brought out a new attacking approach, with victories in Australia and South Africa.

Dhoni led the Indian team in 60 tests with 27 wins. He led the side during a transition phase where the big four – Tendulkar, Laxman, Dravid, and Ganguly had retired. Kohli inherited a solid bowling attack that made it easier for him.

In the ODI format, Dhoni has the edge over Kohli because of his superior record. Team India won the World Cup trophy in 2011 under Dhoni’s captaincy. He built an all-conquering team. The team also performed well in the 2015 World Cup under Dhoni but was knocked out in the semi-finals. Dhoni has won 110 matches out of the 199 ODIs that he played as a captain,while 4 ended in a draw.

Kohli has won 62 out of the 89 matches that he has played as a captain in the ODI format.But he hasn’t won a trophy.He is in the top three of the Indian captains’ list with a win percentage of 71.83, although the team’s superior pace attack during his time is advantageous.

Although Dhoni has more trophies to his name, Kohli’s record makes him a highly successful captain.

We have established that Kohli has a better captaincy record, but the background of their captaincy reigns is often forgotten. Dhoni managed a much younger team during the 2011-15 period.The 2011 squad didn’t have the bowling strength,but the team managed to neutralize it with Mahi’s ability to handle the spinners. Dhoni backed younger players in crucial overs. In two out of the three ICC trophy-winning campaigns under hiscaptaincy, he chose to support the youth over experienced players in the last over.

Like their personal character traits, the leadership styles of the two are miles apart too. While Dhoni preferred to have a settled squad under his reign, giving a longer run to players despite poor performances, his successor follows a more chop and change policy. While both methods have their pros and cons, Dhoni’s policy allowed his team to go into major tournaments with confidence knowing that the captain had their back. This might be a major reason why Dhoni has all the trophies to his name while Kohli has none.

There are also claims that Dhoni could have scored more if he were to bat higher up the order, though his technique against a new ball is still not proven.

Although Captain Cool could have succeeded at a higher batting order, a player such as Kohli has plundered oppositions consistently and is currently on course to owning most major run-scoring records. While Kohli’s stats suggest otherwise, a captain’s ability shines in the clutch games where he hasn’t stood up like Dhoni. With time on his side, he has a lot of room for improvement.Until then, the world’s best batsman remains in the shadow of Dhoni as a captain.

Future Of Indian Cricket: Looking beyond the Dhoni-Kohli-Rohit era

Top 10 ODI Batsmen in the World