September was a tricky month for FPL enthusiasts as players like Cristiano Ronaldo and Mohamed Salah flourished, while players like Romelu Lukaku, Bruno Fernandes and Harry Kane failed to live up to the billing.

With the second international break halting proceeding for two more weeks, FPL managers got another chance to take a breather, regroup, and then come back stronger. Indeed, Gameweeks 4-6 were as frantic as they could be, with marquee players going down injured left, right and centre. While new differential picks emerged, albeit in patches, most managers found it to be quite tricky to circumvent and incorporate them into their squads.

On a similar scale, Captain picks took a hit during the September phase as they fell from averaging 40 points during August to 34 points during September. Those with conventional or marquee picks suffered, while those who went about their business wisely scored handsomely. For instance, my Captain picks have earned me 142 points thus far compared to the average score of 78 points.

In terms of teams, Liverpool’s assets accumulated most points (195 points) followed by those of Arsenal, Chelsea and Manchester City, all amassing 176 points each. On the other end of the spectrum, Leeds United (74 pts), Norwich City (70 pts) and Tottenham Hotspur (60 pts) are the teams so far with the least rewarding assets.

So, without further ado, let’s take a look at some of the key individual and team statistics from the September phase while looking at some of the top performers as well.

Also Read – Cristiano Ronaldo: the Return, the Romance, the Reality

Who had the biggest goal threat in September?

Cristiano Ronaldo (£12.6m) winning the Premier League Player of the Month award over Mohamed Salah (£12.7m) seemed a bit like robbery, to be honest. While Ronaldo equals Salah’s three-goal tally for September, on every other metric, Salah beats him hands down.

In terms of shots, Cristiano Ronaldo was the liveliest of forwards with 17 Shots, with 13 of them from Inside the Box and 7 On Target. In terms of accuracy, it was Ismaïla Sarr (£6.3m) with 7 of his 8 Shots On Target followed by Mohamed Salah with 9 out of 12 Shots On Target.

In terms of goal threat, all three of Ronaldo, Sarr and Salah have impressive Expected Goals (xG) stats with 2.9, 2.6 and 3.3 respectively.

Meanwhile, Leicester City‘s Jamie Vardy has quietly gone about his business, scoring 3 goals in as many games for the Foxes in September. He deserves more credit and recognition in the FPL community and, based on form, is an excellent pick at £10.5m.

Evertonians Andros Townsend (£5.6m) and Abdoulaye Doucouré (£5.7m) have proved to be excellent FPL differential picks, and their respective new roles and responsibilities assigned by their new manager, Rafael Benítez, have certainly played a part in their rise as the go-to budget FPL assets. Townsend has scored 3 Goals and made 2 Assists, while Doucouré has 2 Goals and 3 Assists so far this season.

Moreover, among forwards and midfielders, Mohamed Salah (27 pts) has bagged the most points, followed by Ismaïla Sarr (26 pts), Andros Townsend (24 pts), Abdoulaye Doucouré (23 pts), Wilfred Zaha (22 pts) and Bukayo Saka (22 pts), who are amongst the standout performers for September. 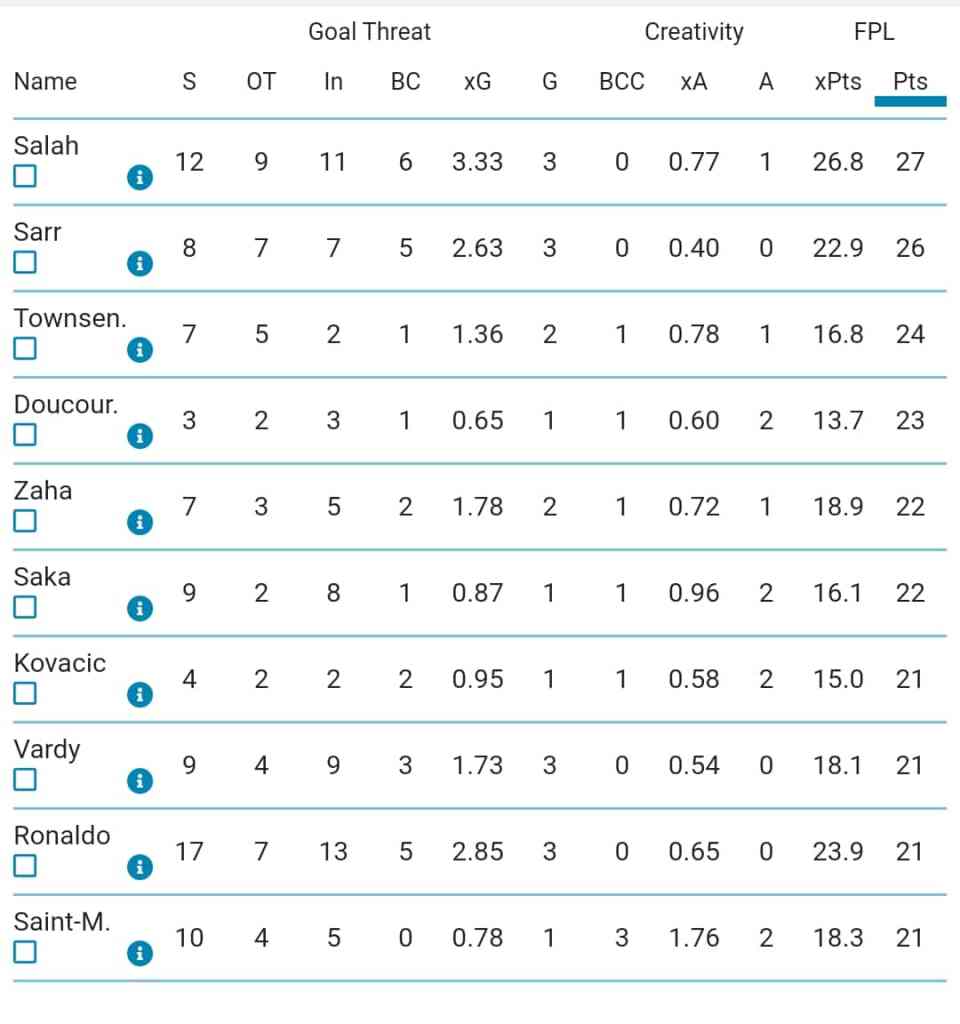 Who were the most creative ones during September?

In terms of creativity, rather surprisingly, it was Brentford‘s Ivan Toney (£6.3m) who created 5 Big Chances and 7 Key Passes along with providing 2 Assists for his teammates at an impressive xA of 2.25.

Conor Gallagher (£5.7m) and Joshua King (£5.5m) were the ones with most Assists during this phase with 3 apiece. Meanwhile, João Cancelo (£6.2m) was the most productive defender with 77 final-third penetrations, 3 Key Passes and 2 Assists against quality oppositions.

Similarly, the Manchester United duo of Paul Pogba (£7.7m) and Bruno Fernandes (£11.8m) had the most number of final-third penetrations, and although Pogba did add to his existing assists tally with 2 more Assists, Bruno was quite unlucky as he had the most Key Passes (15) of any other player and an xA of 1.86 but had zero returns against his name.

Newcastle United’s Allan Saint-Maximin (£6.8m) had a great September as he scored 1 Goal and provided 2 Assists to bag 21 FPL points including 5 Bonus Points for his exploits. Interestingly, Wolverhampton Wanderers’ goalkeeper José Sá (£5.0m) created 2 Big Chances with his long and accurate distribution while accumulating 1 Assist in the process.

Just like Bruno Fernandes, the Liverpool duo of Diogo Jota (£7.7m) and Sadio Mané (£11.9m) created 5 Big Chances between them and had a combined xA of 2.99 but had zero returns to show for it. 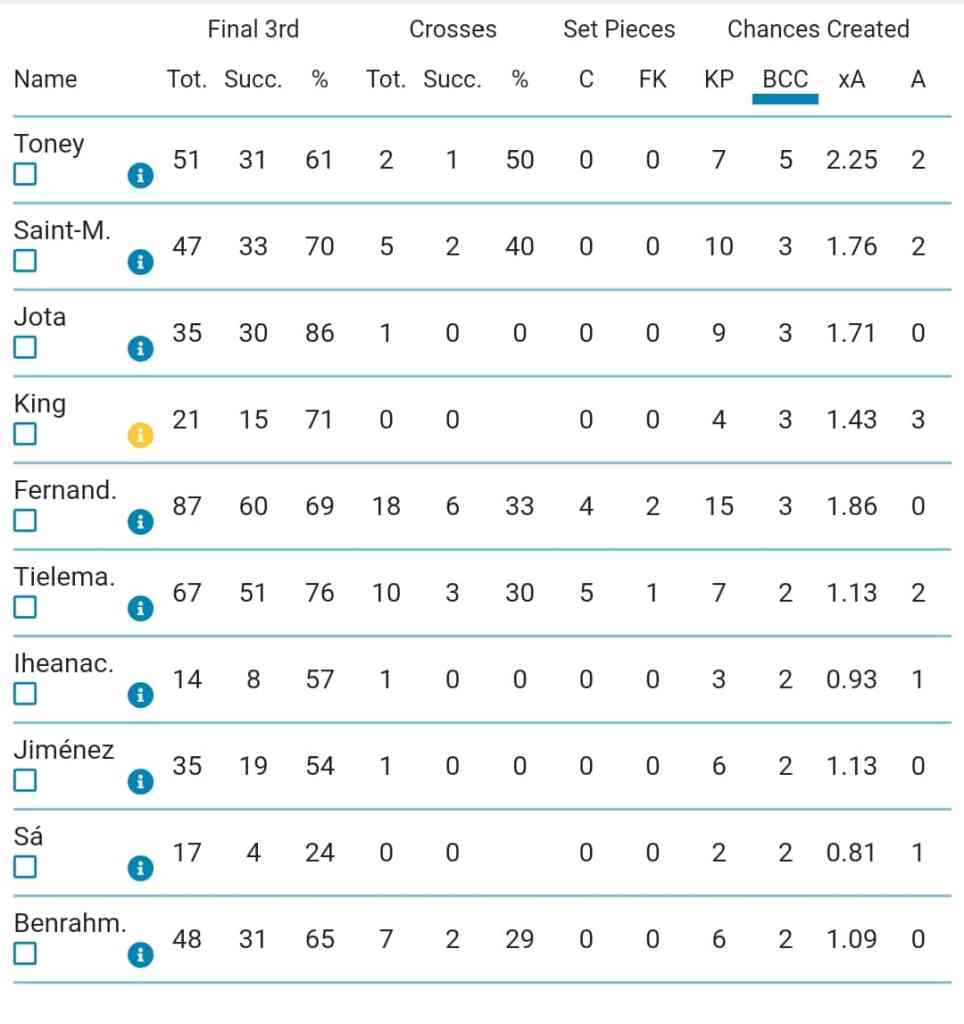 Which teams had the best and worst attacking records?

Liverpool lead the way in almost every possible attacking metric: Jürgen Klopp’s team have scored the most number of goals of any Premier League side with (9) followed by Chelsea and Manchester United with 6 Goals each.

In terms of shots, it’s the same story again with Liverpool (71 Shots) leading the way. Arsenal, after a horrid start to their campaign, have bounced back rather impressively with 55 Shots and 5 Goals to their name.

On the other end of the spectrum, Tottenham Hotspur have struggled massively during this phase as Nuno Espírito Santo’s men have only mustered 20 Shots in the three league games in September while scoring just 1 Goal, that too in a humiliating North London Derby defeat to Arsenal.

Brighton & Hove Albion and Brentford have the second- and third-fewest Shots count respectively; their conversion rate has helped them in coming away with flying colours.

In terms of wasting opportunities, Southampton (0 Goals from 39 Shots), Norwich City (1 Goal from 32 Shots), Leeds United (2 Goals from 46 Shots) and Manchester City (2 Goals from 56 Shots) have been the most woeful during this phase.

Interestingly, Marcelo Bielsa’s Leeds created just 1 Big Chance in September, and while analysing that “Big Chances Created (BCC)” column, something interesting caught my eye: most Premier League teams have, to an extent, underperformed when it comes to Big Chances Created and actual Goals (G) scored, and Arsenal are the only team who have massively outperformed in that aspect.

It certainly has its pros and cons as well. For one, it highlights that Arsenal have been clinical in terms of converting their chances, depending on how big a chance was. On the other hand, it also highlights that Arsenal aren’t creating enough Big Chances and there’s potential for more if the forwards are fed better opportunities. 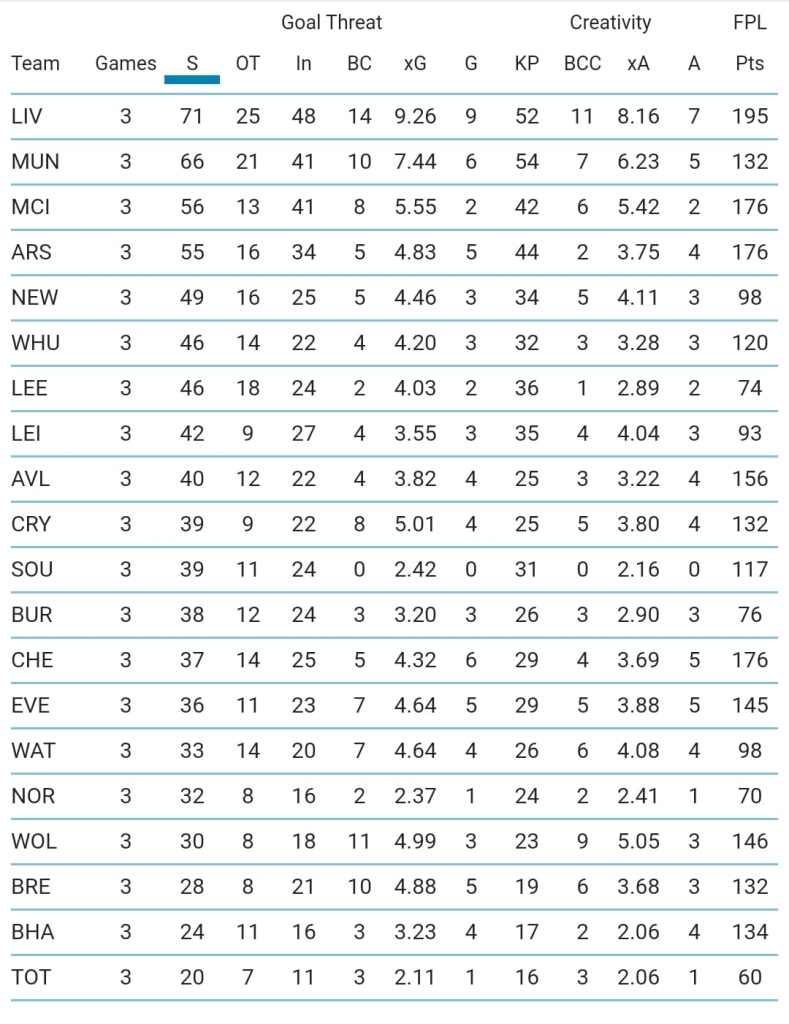 Which teams had the best and worst defensive records?

Although Manchester City and Southampton failed to regularly find the back of the net during the September phase, their defences were solid as a rock. Pep Guardiola’s men kept 3 Clean Sheets, while the Saints kept 2 of the same.

Apart from Southampton and Man City, Arsenal were the most improved defensive unit during September, possessing the second-lowest expected Goals Conceded (xGC) tally of 2.41, while also conceding the second-fewest Big Chances (2) and keeping 2 Clean Sheets.

Elsewhere, Brighton & Hove Albion and Wolverhampton Wanderers carried on their good defensive work from August, and their players now look like safe bets for managers who are on the lookout for cheap but assured assets.

Both Tottenham Hotspur and Leicester City have a lot of defensive catching up to do following their dismal defensive showings throughout September. Brendan Rodgers found himself getting saved by his talismanic striker Jamie Vardy (£10.5m) throughout the month, but he and the Leicester City faithful know this cannot continue. Nuno, on the other hand, needs to shake things up drastically over this international break to somehow halt this slide his team have embarked on.

And to end the piece, I’d like to focus on the two teams who conceded the highest number of Big Chances in September.

Xisco Muñoz’s Watford conceded 10 Big Chances in their last three games. They were, though, resolute in recovering and closing down channels, as highlighted by the stark difference in their expected Goals Conceded (xGC) and actual Goals Conceded (GC) metrics — +2.01, which suggests there’s hope for improvement, as Claudio Ranieri comes in to replace the outgoing Muñoz.

On the other hand, Daniel Farke’s Norwich City just can’t catch a break, can they? They’ve lost all but one of their Premier League fixtures and have conceded the most Big Chances (11) during the September phase. More worryingly, this has carried on from their August run, and there seems to be no solution to this mess apart from sacrificing the very system, which I don’t think Daniel Farke will do any time soon. 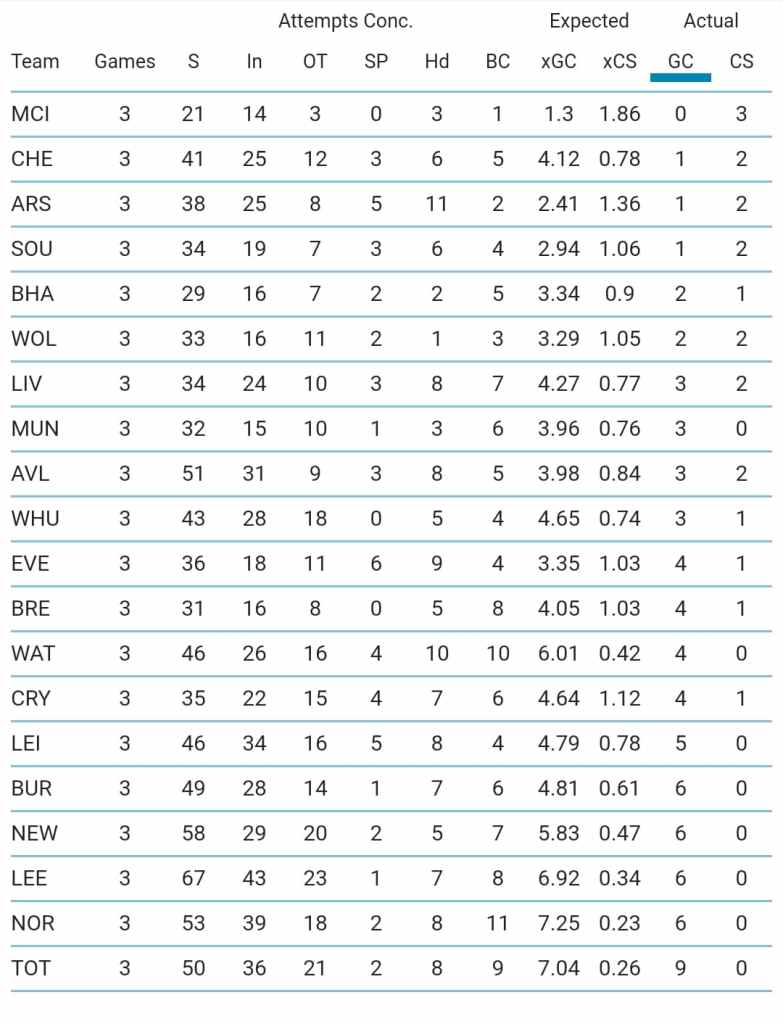