With the international break bringing the Premier League season to a halt for two weeks, I thought what could be better than crunching some numbers and finding out the standout performers from both the individual and team perspective.

85 Goals have been scored and 17 clean sheets have been kept in the opening three Gameweeks. While three teams are yet to score a goal and nine teams are without a clean sheet, some teams and players have blossomed from the get-go.

With all these things to consider, let’s take a look at some key statistics from the August Phase of the 2021/22 FPL season:

Who had the biggest goal threat during August? 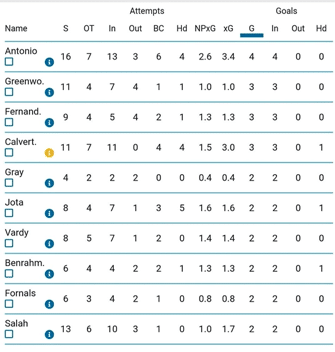 Whenever a conversation turns to goals or attacking threats, there’s only one player that comes to my mind: Michail Antonio (£7.9m). The Hammers forward has been on a different level this season and justifiably tops the goalscorers’ chart with four goals to his name. But not only does he tops the goalscorers list, he’s also dominating all the important metrics that one needs to be concerned with before committing to a player.

Dominic Calvert-Lewin (£8.2m) has started his season in a similar vein. He has become the focal point and lynchpin of the Everton attack under new manager Rafael Benítez. DCL is tied with Antonio for Shots on Target (7) and is second for Big Chances (4). He’s scored three from three, two of which were penalty conversions.

The Manchester United duo of Mason Greenwood (£7.6m) and Bruno Fernandes (£12.1m) has had a great start to their 21/22 Premier League campaign. Both have scored three goals, but it’s Greenwood who edges his teammate for Shots with 11 of them while Bruno has had two Big Chances from his opening three games. But both could end up being negatively impacted as FPL assets following the arrival of Cristiano Ronaldo (£12.5m).

The Liverpool trio of Mohamed Salah (£12.5m), Sadio Mané (11.9m) and Diogo Jota (£7.6m) has had a good start to their campaign. It is no surprise that Salah has had the most Shots (12) followed by Mané (11) and Jota (8) while both Salah (10) and Mané (11) have had the majority of their Shots from Inside the Box. With Roberto Firmino (£9.3m) going down injured against Chelsea, Jota could see an extended run as the Liverpool frontman.

Despite being one of the livelier teams in the opening three fixtures, Wolverhampton Wanderers have nothing to show for it as they are one of the three teams yet to score a goal this season. Both Adama Traoré (£6.0m) and Raul Jiménez (£7.4m) have taken 12 shots each. Adama has had two Big Chances coming his way while Jiménez has had one Big Chance, something they’ve failed to make it count but the potential is there.

Last but not the least, Romelu Lukaku (£11.5m) has had a promising start to his second stint with Chelsea as the Belgium International managed 9 Shots Inside the Box across his two games.

Which players provided the most creativity during August? 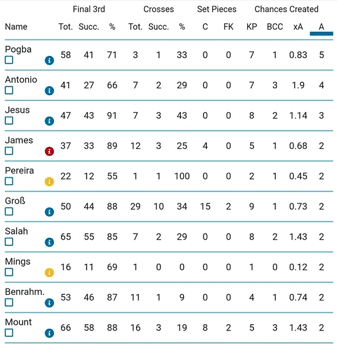 To the surprise of many, Paul Pogba (£7.7m) has been racking up assists left, right and centre. The World Cup-winning midfielder already has five Assists compared to the three he managed for the whole of last season. And to put things into perspective, his five Assists have come from seven Key Passes, only one of which was a Big Chance Created. That’s quite telling. Keep an eye on him.

Michail Antonio is not only the biggest goal threat, he’s also been one of the most creative players. The Englishman has already racked up four assists, having registered seven Key Passes, three of which were Big Chances Created. Antonio also leads the charts for Expected Assists (xA) with 1.90. There’s no denying that he has been the standout player.

Trent Alexander-Arnold (£7.5m), Mason Mount (£7.5) and Riyad Mahrez (£8.9m) all share the top spot for Big Chances Created along with Antonio, while Mahrez has created his chances from just 124 minutes of football. Trent has been unlucky not to have amassed more Assists against his name as the Scouser only sits second to Michail Antonio with an xA of 1.76.

Manchester City forward Gabriel Jesus (£8.5m) has three Assists from three matches, while Southampton forward Che Adams (£7.0m) has also created two Big Chances and has two Assists against his name. Salah and Richarlison both rank highly for their creativity and should’ve had more Assists from their opening three fixtures.

Trent also leads the charts for Key Passes with 15 while Newcastle United‘s Matt Ritchie (£5.0m) is behind him with 11 Key Passes, Raul Jiménez (10), Adama Traoré (9) and Pascal Groß (9) have been the other creative outlets.

Which teams have the best and worst attacking records? 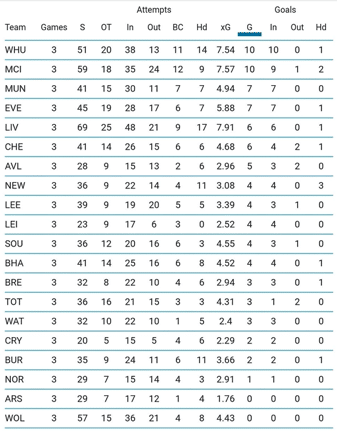 Just like the players’ table, West Ham United are again table toppers when it comes to goal threat. They’ve scored the most goals (10) along with Manchester City (10) following their dominating displays against Norwich City and Arsenal.

It is again West Ham (12) who have created the most Big Chances from the opening three fixtures followed by City (11) and Liverpool (9). The Reds lead the Expected Goals tally with an xG of 7.91, meaning they are underperforming, as Jürgen Klopp’s men have only scored six Goals from their opening three matches.

On the other end of the spectrum, Arsenal sit bottom for Expected Goals with an xG of 1.76 while Watford (1) share the bottom spot with Arsenal (1) for Big Chances Created. The first month of the 2021/22 season has been an absolute disaster for the Gunners.

Meanwhile, Patrick Vieira’s Crystal Palace have had the least Shots taken so far with 20, but what’s more surprising is Leicester City sitting 19th with 23 Shots. Brendan Rodgers’ side have blown hot and cold so far as long-term injuries to key centre-back personnel seems to have offset their balance going forward.

Despite sitting top of the table with 9 points, Tottenham Hotspur sits 17th on the goal threat index. They have created just one Big Chance from their opening three fixtures, and have played 23 Key Passes with an xG of 4.31.

Which teams have the best and worst defensive records? 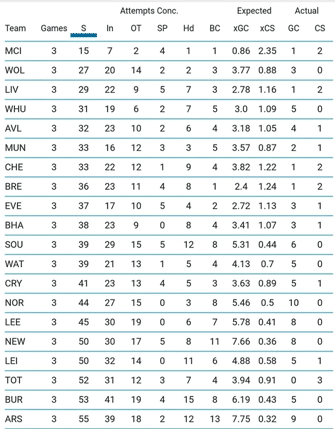 Tottenham Hotspur are the only team to have three clean sheets from their opening fixtures, which is very surprising considering they are third for most Shots conceded (52). Only Burnley (53) and Arsenal (55) have conceded more shots than Spurs.

The Expected Goal Conceded (xGC) metric also shows how fortunate Spurs have been to keep three clean sheets. Their xGC stands at 3.94 while their Expected Clean Sheet (xCS) hasn’t even crossed 1 (0.91). Beware if you are thinking about gambling on a Spurs defender post international break.

Meanwhile, Manchester City have been imperious at the back. The Cityzens have only conceded 15 Shots and have an xCS of 2.38, having kept two clean sheets against Norwich and Arsenal. Brentford (1.24), Chelsea (1.22) and Liverpool (1.16) are behind City in the xCS metric.

Elsewhere, West Ham United (3.0), Norwich City (5.46) and Leeds United (5.78) have been unlucky to have conceded the number of goals they have as their xGC shows their defences are not as fragile as the final output would suggest.

Arsenal are topping the charts for the wrong reasons as they lead the number of Big Chances Conceded chart with 13. Moreover, teams like Manchester United have managed to escape scrutiny following their decent start to the season, but the Red Devils have conceded five Big Chances from their opening three games, which is a concern given their star-studded lineup. Hence, beware before committing to defensive players from the likes of Leicester, Arsenal, Manchester United and Tottenham.